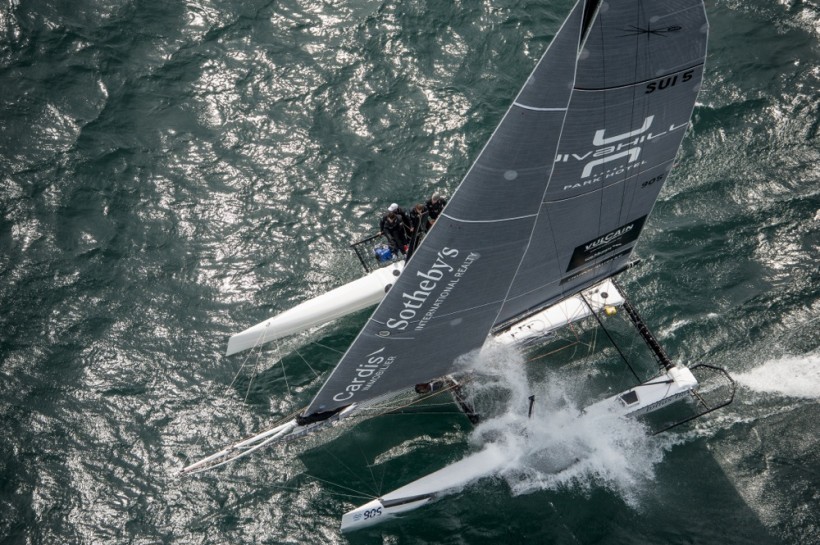 The young Team Tilt crew led by Lucien Cujean and Sebastien Schneiter finished last Saturday’s Bol d’Or in sixth place. The 76th edition of the largest lake regatta in Europe enjoyed near perfect conditions and Team Tilt completed the course from Geneva to Le Bouveret and back in 5 hours, 50 minutes and 12 seconds. Dona Bertarelli’s Ladycat won the race.

“Getting home in time for dinner on a Bol d’Or day is unheard of,” said Jeremy Bachelin, mainsail trimmer on Team Tilt. “This is the fastest I have ever done it, at times we were doing 23knots and we made it back from Le Bouveret to Geneva in two hours! It was absolutely brilliant!”

Team Tilt prepared well for the race and managed to neutralise an average start by heeding the advice of weather specialist, Bernard Dunand. “The conditions were as forecast so we were able to apply the strategy that we had pre-planned. Thanks to the choice we made after the start we got back up to the front of the fleet and even took the lead for a while off Lausanne. We lost a few places off Vevey as the breeze favoured the other boats, took one back at Le Bouveret barge rounding and shot off towards Geneva. It was a bit of a Decision 35 ‘procession’ back to the finish with no passing opportunities,” he described.

Team Tilt’s sixth place is something to be proud of, as team manager Alex Schneiter points out: “Given the conditions and the team’s experience, I think we can be proud of our Bol d’Or result. We even managed to give our direct competitors a hard time here and there!”

The Bol d’Or results count towards the Decision 35 Vulcain Trophy season championship ranking and Team Tilt’s sixth place puts them in fifth overall at the season halfway mark, just one point from third place. The second half of the season promises to be a battle for the podium!