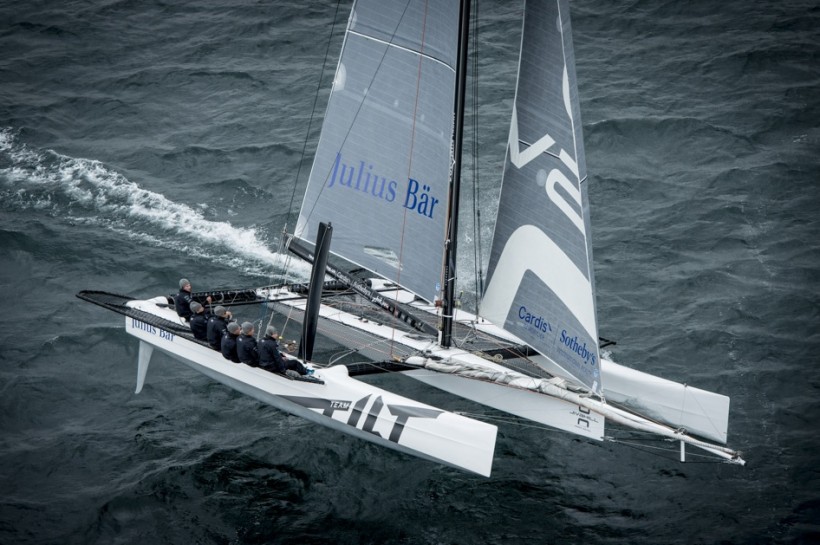 With a Decision 35 on Lake Geneva and a 49er Olympic campaign, Team Tilt announces an ambitious dual campaign this season. The team also has a possible Youth America’s Cup in its sights and is recruiting youth sailors to the squad that would qualify to compete.

Having posted a superb fourth place at the inaugural Red Bull Youth America’s Cup in San Francisco in September 2013, the young Team Tilt sailors are shifting focus to the Vulcain trophy Decision 35 championship event on Lake Geneva and a 49er Olympic campaign.

Sébastien Schneiter, winner of three bronze Laser Radial championship medals in 2013 will lead the Olympic campaign for Tokyo 2020; Lucien Cujean, who helmed the AC45 so well at the Red Bull Youth America’s Cup last year, will crew for him. Tanguy Cariou, one of the region’s most talented sailors, will be sports director and Simon Hiscocks, 49er double-Olympic medallist, will be the coach.

“It’s a great opportunity to be involved with this Olympic campaign from the start, to be able to build it together,” said the British Olympian. “I will be sharing my knowledge of the boat with Sebastien and Lucien so that they can race this year.”

“In the longer term, we will work at different venues around Europe ahead of the 2020 Olympic Games in Tokyo.” It will be a lot of work and dedication for the duo, so according to Simon, the most important aspect will be: “Enjoyment. That is a vital factor in this incredible adventure!”

Alex Schneiter will oversee both projects while also keeping an eye on a possible Youth America’s Cup. “With the help of Tanguy Cariou we will be recruiting youth sailors that will be 24-years-old in 2017, the presumed date of the next Youth America’s Cup,” explained the team manager. “The goal is to develop a solid team that will train on the Decision 35 with a view to proudly representing Switzerland in the United States. This continues our support of young talented Swiss sailors.”

Team Tilt returns to the Decision 35 circuit on Lake Geneva after a successful first year in 2013, with Lucien Cujean, helm in 2013, sharing the role this year with Sebastien Schneiter. The championship kicks off next weekend at the Societe Nautique de Geneve with the Grand Prix des Ambassadeurs.

Team Tilt thanks its partners: the Jiva Hill Park Hotel and the Julius Baer group for their support for the second consecutive year and welcomes new sponsor, Cardis Immobilier | Sotheby’s International Realty, onboard.

Media information : high resolution and copyright free photos for editorial use are available at: www.maxcomm-media.com