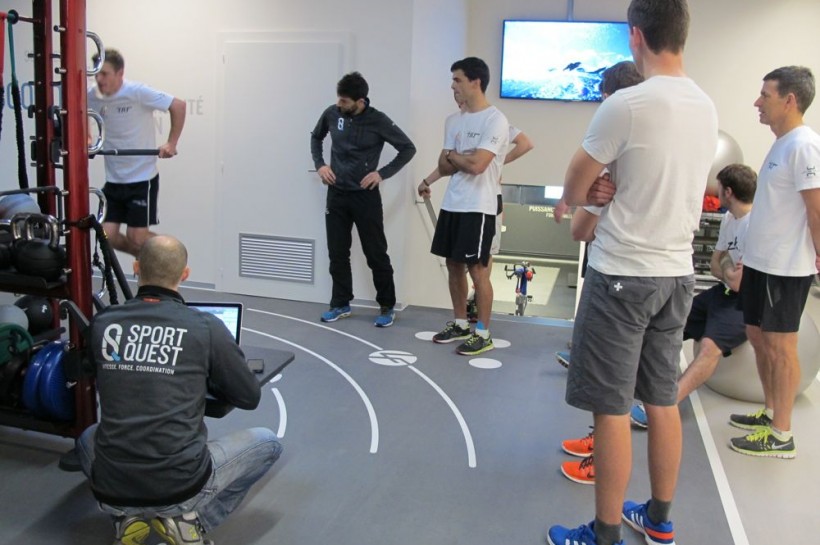 Team Tilt is back to work : on Saturday January 25, the full crew launched the season. Physical tests at the new center Sport Quest in the morning and briefing in the afternoon. The goal of this day was to put the team back together after the winter break, and present the new team members and projects.

Physical tests were tough at Sport Quest in the morning, with the P-P-C trainers measuring the guys’ strength, performance and speed : « It’s really hard to hold one test after the other after the winter break », explains Tanguy Cariou, Team Tilt’s new sports’ director. « The atmosphere is great, there’s a very positive competition between us. » With the brand new machines at Sport Quest, the trainers will push the guys even harder than last year : « The overall level of the team is good and consistent », continues P-P-C coach Michael Vincent. Tanguy Cariou’s arrival and his excellent results bring a new motivation to the team ! According to the results, we will build a personal program for each sailor during the season. »

The team moved from the sport center to a meeting room for the afternoon. Presentation of new team members – Tanguy Cariou, Nelson Mettraux and Sebastien Schneiter, season’s planning and objectives were discussed. « After a stunning 2013’s season and a fourth place at the Youth America’s Cup, Team Tilt will focus this year on the Vulcain Trophy, while putting in place at the same time a team for the next edition of the Youth America’s Cup », explains Team Leader Alex Schneiter. « I will sail with the team every now and then, but our goal is to support young sailors, and achieve good results throughout the season. »

The team is aware that the 2014 Vulcain Trophy level will be higher than last year. Tilt will train 22 days on water before the first competition in May. « I want to put in place a structure for youth sailor, that I missed when I had their age », says Cariou. « I will be onboard to coach them, but what motivates me most is my onshore job to manage the team. The nine sailors will be very skillful, and we’ll rotate between the different roles onboard. »

A few details have to be confirmed before the official announcement of Team Tilt’s second project alongside the Decision 35 – an olympic campaign.

You can watch the movie of the physical tests here : http://youtu.be/dy9Dbrf6WnE