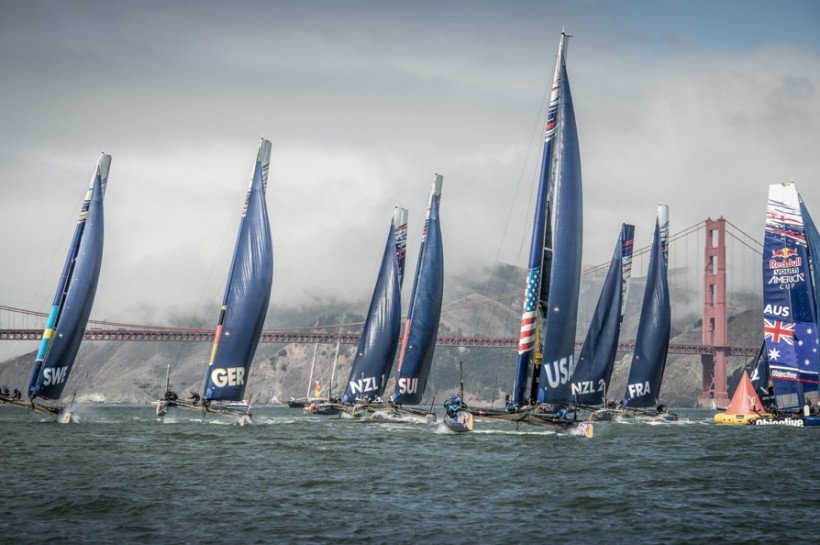 The young Swiss sailors onboard Team Tilt were unable to repeat yesterday’s excellent performance on San Francisco Bay finishing the day with a ninth and a seventh place. But all is not over, with a day to go and two races ahead, Team Tilt will be eying the double points finale to regain position on the leaderboard.

Despite excellent starts and good crew work on day three of the Red Bull Youth America’s Cup, success eluded the Team Tilt sailors. A tactical error in the first race and several penalties saw them finish ninth and seventh putting them in sixth place overall going into the final day of racing.

“We were lacking anticipation that is for sure,” said wing trimmer Jeremy Bachelin. “We had two good starts, but then made costly mistakes.”

Race one saw Team Tilt gybe first at the first mark, a decision that put them at the back of the fleet. Race two started off better, but the team received another penalty before becoming caught up in the Next World Energy code zero halyard which went under the Swiss boat – Team Tilt called for redress.

“Today we really saw the level of the teams,” said coach Laurent Voiron. “Our Swiss sailors are racing against some of the best young sailors of their generation and they are holding their own!”

“We are not far behind and the podium is still within our sights” added Jeremy Bachelin. “We need to anticipate situations much more tomorrow and limit mistakes during the race.” Skipper Lucien Cujean is cool-headed going into the final day: “We were perhaps a bit too aggressive today. The team seems to operate better under pressure – there is everything to play for tomorrow.”

The final race tomorrow, race eight of the Red Bull Youth America’s Cup, counts for double points. Team Tilt will be aiming to neutralise any errors and achieve its goal of stepping onto the podium.