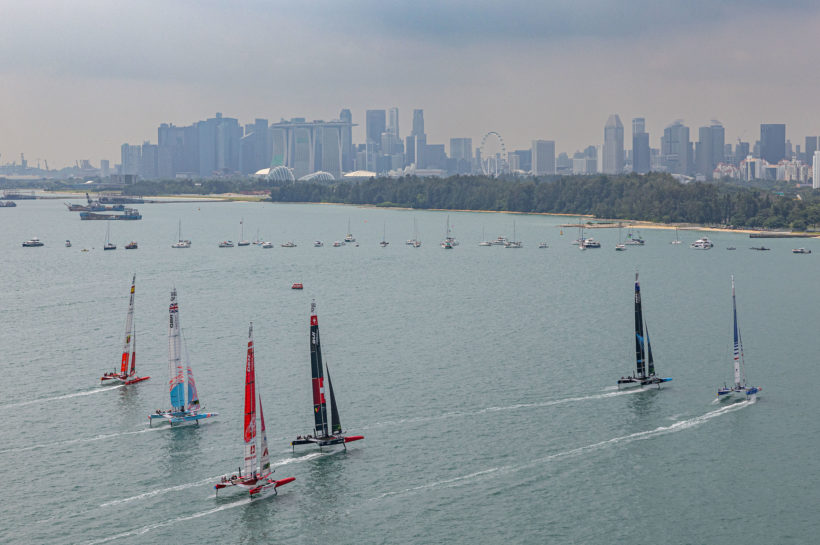 15 JANUARY, SINGAPORE It was super Sunday in Singapore for Swiss SailGP Team today. The Swiss came out of the blocks on fire, sailing fast and consistently to deliver an impressive performance. The team picked up its first ever race win in the day’s opening race, followed by a second place in the second and final fleet race.

Only two fleet races were sailed before the three-team winner takes all final.  Despite podium finishes in both races, the Swiss narrowly missed out on its first time in the final by just two points.  The team finish fourth overall in Singapore, its highest result this season. New Zealand took the event win after defeating Denmark and Australia. Full race results HERE.

Swiss SailGP Team driver, Sébastien Schneiter, on the team’s progression: “It was a big day for our team and a day to remember, a real milestone moment. We got our first race win along with a second place, which was by far the best result in the fleet today. But more importantly we had our best day on the water overall.

“We had two great starts, and we were fighting the Kiwis in both races and both times we kept them behind us. I’m really proud and happy for the team as everybody has been working so hard to get us to where we are today. We always believed in ourselves, and we knew it was coming, but it’s a nice moment to have it here this weekend.

“The next step is being in the podium race; we were really close to that today. For now, we will enjoy this small victory and then get back to the hard work again to be even stronger in Sydney next month.”

After yesterday’s conditions reduced the crew, today it was a full line up onboard the F50s. Nathan Outteridge was glad to be back supporting with the tactics: “It was a much better day today weather wise, enough breeze to foil and sail with the full crew of six, so I was really happy to be back onboard.

“Seba and the team did a great job with starting and had good positioning and good execution in the two races. The starts are something we have been doing a lot of work on so all that homework paid off today. A first and a second place, you really couldn’t be happier with that here in Singapore.”

“It was a big step forward and exactly what we needed for the team and for our partners, fans and supporters. We have been working really hard onboard the F50 since our first event in Bermuda back in May last year. At times we have struggled with our results, but we always keep pushing and moving forward.

“Today it all came together, and we will use it to build on for the rest of season 3 and heading into season 4 later this year.”

Swiss SailGP Team head down under next for the KPMG Australia Sail Grand Prix in Sydney, 18-19 February. An event in Christchurch, New Zealand, follows a month later, 18-19 March. The season 3 finale takes place in San Francisco, May 2023.