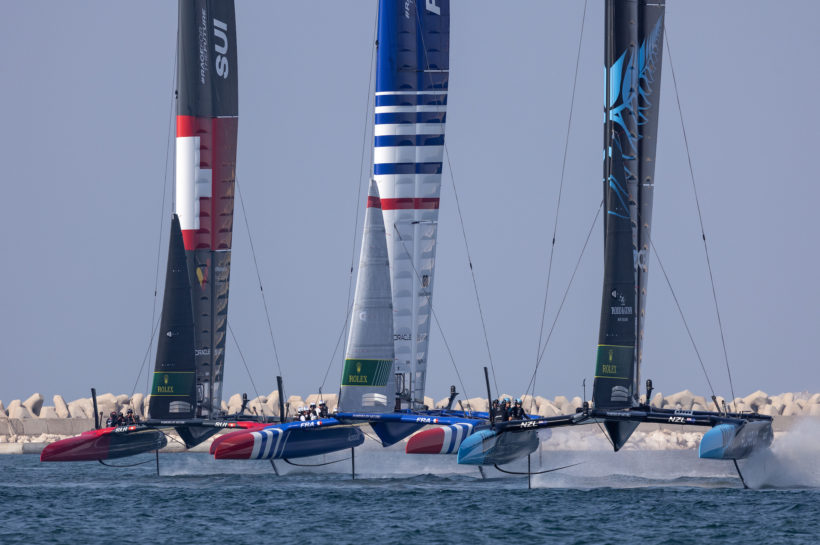 It was a frustrating final race day for Swiss SailGP Team, a couple of penalties ended its chances of a final appearance in Dubai and advancing on the leader board. The team went into the race day the closet it has ever been to the podium, but finished frustrated to place 8,7,6 across its three races.

In race four, the winner takes all final featuring the top three teams of the weekend, it was a nail-biting fight to the end. Tom Slingsby’s Australia executed a stunning comeback to seize victory against Ben Ainslie’s British team and Quentin Delapierre’s French Team.

Swiss driver Sébastien Schneiter on the weekend’s racing, “Today we had three races in some stronger winds and it was the ideal conditions for the F50. It was a more difficult day for us than yesterday, we struggled a bit off the line and then we had some good opportunities in every race but also a couple of penalties here and there. So some difficult moments made for some not so good results.

“But in the end, it’s still probably our best event so far and the closet we have ever been to the podium so there’s some real progress. As much as we are improving, the whole fleet is also improving and when you look at the points it’s as tight as it has ever been. But it’s definitely still a big challenge.

“It’s been an amazing week for us here overall in Dubai, it’s been intense but we had some great training days, and the racetrack was amazing – the course was inside the harbour with no waves and really close racing. Great for the spectators too! There’s for sure a lot of learnings from here that we can take away for the next event in two months.”

Nathan Outteridge was supporting the team in his sailing advisor role and also racing onboard in the strategist position. He summarised, “We’ve had a great time here in Dubai. It was really valuable for the team to get in the extra training days; we were able to make some big gains in our light wind sailing manoeuvres and performance. When I joined the Swiss team a few months ago there was a lot of work to do in these aeras and this weekend I felt for the first time we were actually racing the other boats.

“For a new team to catch up to the top teams that have got all the experience it is extremely challenging. Unfortunately, the results didn’t put us in a position where it left us in a good place overall, but the gap is getting smaller, the team is learning a lot and you can really see that things are moving forward.”

Dubai marks the final SailGP event of 2022. Season 3 continues in 2023 with the Singapore Sail Grand Prix taking place 14-15 January. Singapore will be the first time the global league has raced in South East Asia. Watch the full reply of day two in Dubai HERE.