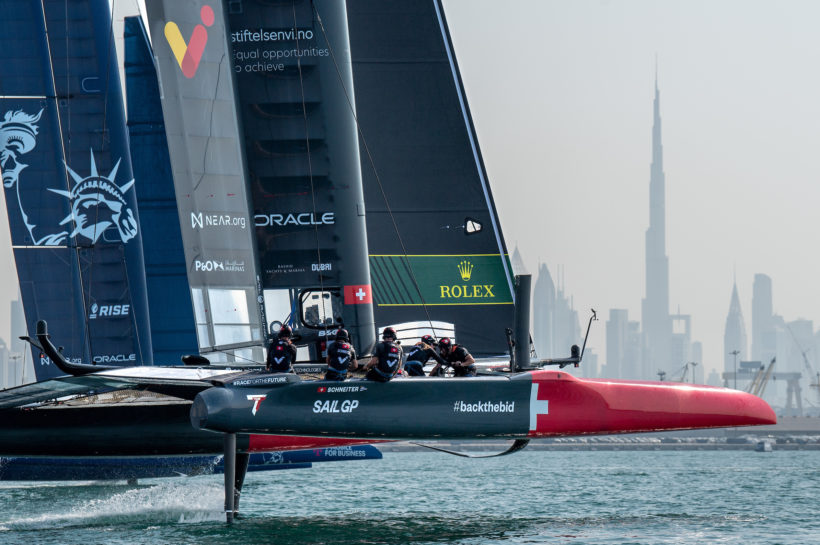 Swiss SailGP Team start the ‘second half’ of SailGP Season 3 this weekend, at the Dubai Sail Grand Prix presented by P&O Marinas 12/13 November. It’s the first-time the fleet will race in the UAE and after the strong breeze in Saint-Tropez, and ocean swell of Cádiz, the lighter sailing conditions will be a welcome change.

However, the tight wall-to-wall stadium racecourse will present its own challenges, bringing some of the closest racing of the league so far. Six fleet races are scheduled over the two days along with a winner takes all final on Sunday afternoon, featuring the top three teams of the event.

All the action will be streamed live in Switzerland on Blue Sports / Blue Zoom and YouTube at 12:00 CET both race days.

The Swiss team reshuffle the crew line up onboard again; Sébastien Schneiter remains behind the wheel, driving the F50, whilst Nathan Outteridge takes on a new position onboard as strategist, calling out impending boat on boat situations across the racecourse. Stuart Bithell and Jason Saunders race in the roles of wing trimmer and flight controller, respectively. Rotating in the afterguard grinder positions are Julien Rolaz and Arno De Planta (G1) and Laurane Mettraux and Jeremy Bachelin (G2). For De Planta it will be his first time racing on the F50 and steps in for Eliot Merceron who is injured.

Schneiter on the racing in Dubai, “We’ve had three extra days of training for this event, which has been great and given us some confidence going into the weekend’s racing. The track has been surprisingly good so far, I was not actually expecting it to be this good, we are sailing so close to the wall the fans could almost high five us as we are tacking on the boundaries! I think this event could come down in history for SailGP as being one of the best events for the fans.”

He continues, “We are racing inside [the sea wall], so the flat water is great for the F50, we can push the boat really hard. It will be a lot easier condition wise than Cadiz, where we had the waves, so it means we can go faster and can achieve some nice manoeuvres and moves.

“Throughout the season we have been changing our line up onboard; we’ve had Nathan driving, myself driving, but this event will be the first time I will be driving with Nathan behind me [in the P6 strategist position].

“It will be a good advantage for us, at this racetrack it’s a lot about positioning and there’s going to be a lot of traffic, so you need some good eyes out of the boat.

“We’ve been learning a lot over the past six months since starting season 3 in Bermuda and I’m feeling confident that this will be our best event so far this season.”

After the six events so far CEO Tanguy Cariou sees the pressure increasing for part 2 of season 3. “We’ve had a good few days of training here in Dubai and the additional time on the water allowed us time to really work on some of the smaller details and our boat handling. Now we can be fully focused on the racing over the weekend.

“We have been frustrated with some of our results so far, so the pressure is on, we are looking to deliver here in Dubai and moving forward.”

Dubai Sail Grand Prix is the 7th stop of the global championship and the final event in 2022. With the light conditions forecast, teams will be racing with the large 29 metre wings. Racing takes place between 15:00-16:30 GST on Saturday and Sunday.