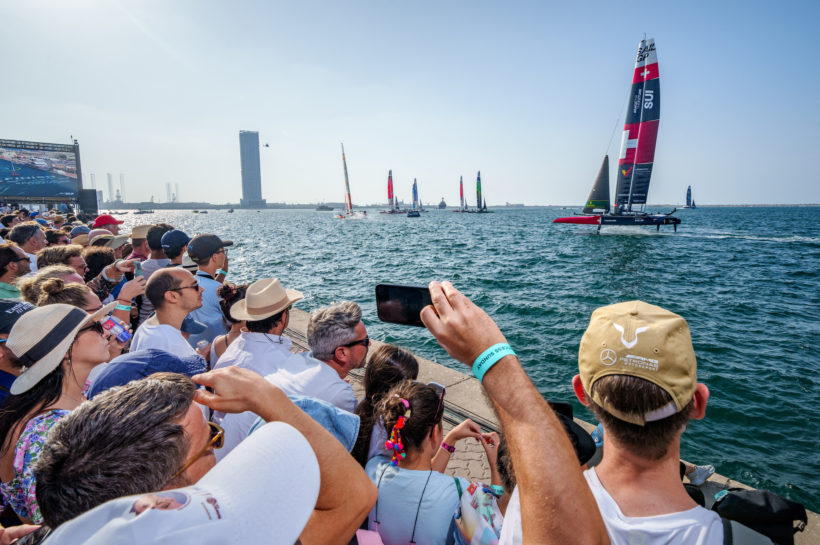 The Swiss were new to the global league this season, starting operations back in January and first racing the F50 in May. Since then, the team has competed in six events including four back-to-back stages in Europe.

“We’ve worked hard since January to build up the new team, bringing in members from Switzerland and other countries, including the UK and New Zealand, to help fast track learnings. Our sailing operations started at the end of April in Bermuda, and since then we’ve only had 11 days of racing the F50 and 27 of training.

“We have been full on with the operations across all the departments; sailing, WPP, communications, marketing and sustainability with the Impact League. All in all, it’s been a promising period and a good learning curve, and we have already achieved so much in most of the departments except the sailing results. Now we are at the halfway point in season 3, we are using this time as a reset in a way and looking forward to starting part 2 more focused and more determined than ever.”

Cariou on the venues so far, “Bermuda was a great venue, we enjoyed steady wind and flat water and I would say it was there we had the easiest conditions. Since then, we haven’t had two back-to-back days that have been similar.

Chicago and Saint Tropez alternated strong and light wind. Then in Plymouth, Copenhagen, and Cadiz, the racecourse and venues were tricky.

“Stable conditions are the best for us right now. That’s where we are really close to the other team in terms of boat handling. Racing the F50 in stronger wind requires experience.

It’s hard for a new team starting out in this environment because it is the most competitive league in sailing. But we knew this when we launched the project and that’s also what excited us to join. Restricted training time is one of the most challenging parts, but on the other hand, we have access to all the data and videos, so we have the tools there to catch up to the other teams.

“We also know we struggle with the starts, and at times we missed some opportunities on the racecourse. But we have learnt so much on the boat handling, maneuvers and straight-line boat speed and are now not so far from the pack.”

In the summer, the team made a strategic decision to bring on experienced sailor, Nathan Outteridge, to support the team as sailing advisor and co-driver.

“It was a good move to bring Nathan on to support the team. We saw an opportunity with Japan SailGP Team not continuing and we took it. Nathan is a top racer with plenty of experience in SailGP and other circuits, he is definitively helping us to develop the performance of the team.
It’s also a strong signal for our team members and the other teams. We will take whatever actions to be competitive and reach the top of the leader board.”

Looking ahead to the Dubai Sail Grand Prix coming up later this week. “We are now here in Dubai, preparing for the seventh event in the league. It’s a new venue for all the teams and will bring some stadium racing and short races and – we hope – steady conditions.

“We have some additional training, which essentially means time – time on the F50, time on the racecourse and time to work on the smaller details and boat handling from Monday to Friday so when it comes to it we can be fully focused on the racing during the weekend.

“The team’s mood is good; it’s always good as it’s exciting and every day there is progress. However, for sure the team is frustrated with the results and the pressure is on, which is a good feeling. We have no excuses. It’s time to deliver.”