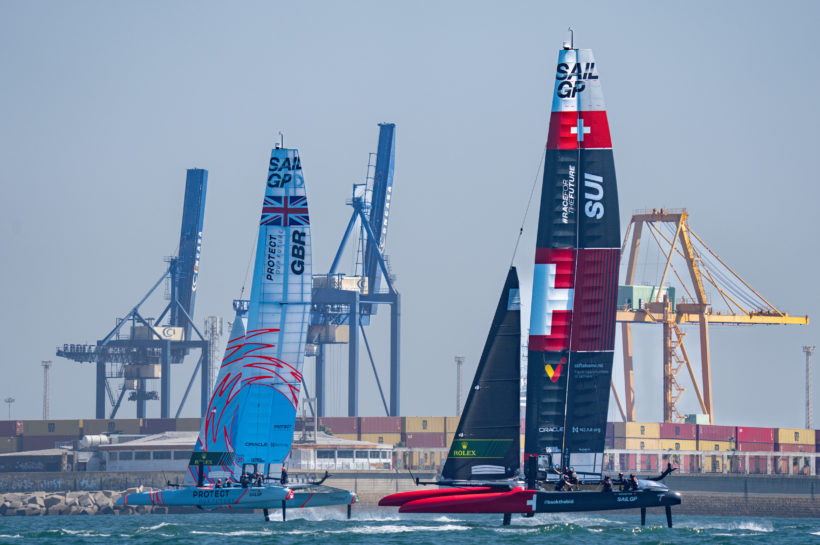 It was a tricky opening day on the bay of Cadiz at the Spain Sail Grand Prix; racing started with a moderate breeze, that got lighter throughout, and ‘washing machine’ choppy conditions tested the teams. It was tough onboard but the spectators enjoyed the show, large crowds lined the sea wall.

The Swiss had a storming start in race one, and maintained the pace to finish 5th, but were left frustrated in race two after a penalty from Nicolai Sehested’s Danish team forced them to the back of the pack. In the third and final race of the day it was hard to come back from a slow start.

At the top of the nine strong fleet, Australia and France are tied on 24 points heading into tomorrow’s second and final day of racing.

Driver, Sébastien Schneiter, on the team’s performance. “I think there were struggles out there for everyone today, the conditions were hard to manage and it was new for the teams to sail in those waves.

“Generally, we felt like we were going right in terms of speed and boat handling and in today’s first race we had a great start and were really up there battling with the fleet throughout. In the second race we struggled after we got a penalty against Denmark, so that was frustrating, and it really set us back. Then in the third race we just didn’t get off the [start] line quick enough and with this level of competition it’s so tricky to come back from that.”

Schneiter continued, “Tonight, as part of our debrief, we will focus on looking at our starts and how to improve these. When we are sailing with the other boats we are going well, but we know we need to work on our start line.”

The Spain Sail Grand Prix presented by NEAR returns tomorrow at 16:00 CEST, with ‘Super Sunday’. Two fleet races are scheduled with one winner-takes-all three team final. The racing is broadcast live in Switzerland on Blue Sports TV and YouTube.