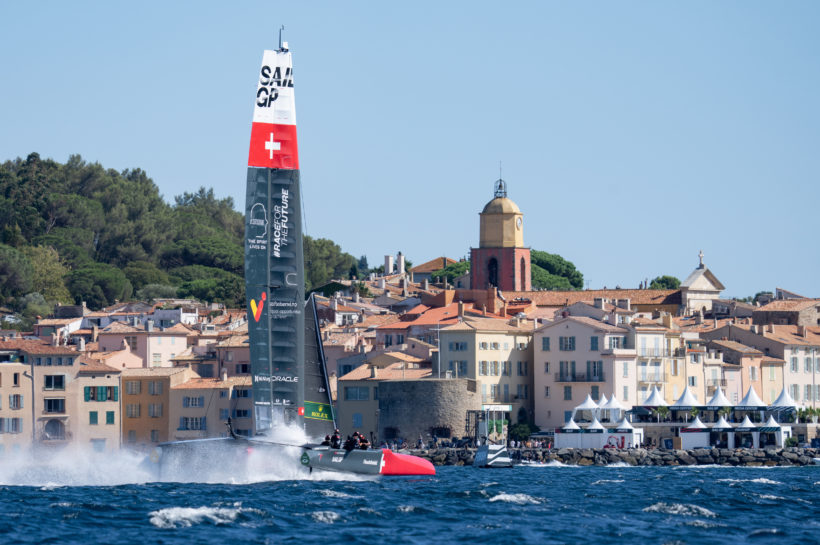 Swiss SailGP Team hit the water in Saint-Tropez today, ahead of this weekend’s Range Rover France Sail Grand Prix, taking place Saturday 10 and Sunday 11 September. It’s the event closest to home for the Geneva based team and racing starts at 14:30 local time each day.

Tomorrow (Friday) is an official practice race day where all nine teams will line up for the first time this season on the French Rivera. All the action will be streamed live in Switzerland on Blue Sports / Blue Zoom and YouTube at 14:30 CEST both race days. Tickets to watch the racing are still available HERE.

The Swiss line up onboard remains the same as Copenhagen last month with Nathan Outteridge behind the wheel, Sébastien Schneiter racing as strategist, Stuart Bithell as wing trimmer and Jason Saunders as flight controller. Laurane Mettraux will race again in the G2 position, the only female athlete racing in this role, and Julien Rolaz and Eliot Merceron will alternate in G1. Jeremy Bachelin supports the crew as reserve athlete.

Swiss SailGP Team was officially launched a year ago this week and Season 3 is its first season of racing on the global league. The next two SailGP events, in Saint-Tropez followed by Cadiz, together mark the half-way stage of the Season’s 11-event calendar.

CEO Tanguy Cariou comments, “We’re here in Saint-Tropez getting ready for our fifth SailGP event and third event in Europe. We officially launched the team one year ago this week, since then we’ve been working hard to build and grow to get us to this point.

“It’s the event closest to home and we are looking forward to some great racing in the gulf of Saint-Tropez. It’s back up to a nine strong fleet, which always makes for really competitive racing, but we are expecting some good results here.”
Co-driver and strategist, Sébastien Schneiter, on hitting the water today for training, “It was a great day today! In Copenhagen pre-event we didn’t get that much time to practice before the racing, as there was no wind, but today we got a lot of time on the water. Tomorrow for practice racing it should be similar so hopefully that will put us in a better position heading into the weekend.

“We had some amazing sailing out there and you could really feel the improvements onboard. At the end of the day I got back on the wheel, which was really interesting, it felt like I was sailing with a different team compared to before! Everyone has been stepping up. Nathan is helping us to progress but everyone is learning fast too and really improving as the season goes on.“

The team had success off the water this week, topping the SailGP Impact League as well as being most improved for the third consecutive time. The team is supported by its main partner and Race for the Future partner, WE Foundation and together champion equal opportunities to achieve.

Tanguy Cariou on the Impact League result, “We won the impact league for Copenhagen and were also the most improved for the third consecutive time, which is a great achievement. We started at the bottom of the ranking in Bermuda, the whole team worked hard to improve and after all our efforts, along with the support of WE Foundation, are really proud to be top of the podium.”

Cadiz in Spain is the next stop for SailGP from 24-25 September, before the fleet visits Dubai, Singapore, Sydney, Christchurch and season finale in San Francisco, May 2023. Watch the team’s journey to Saint-Tropez HERE.