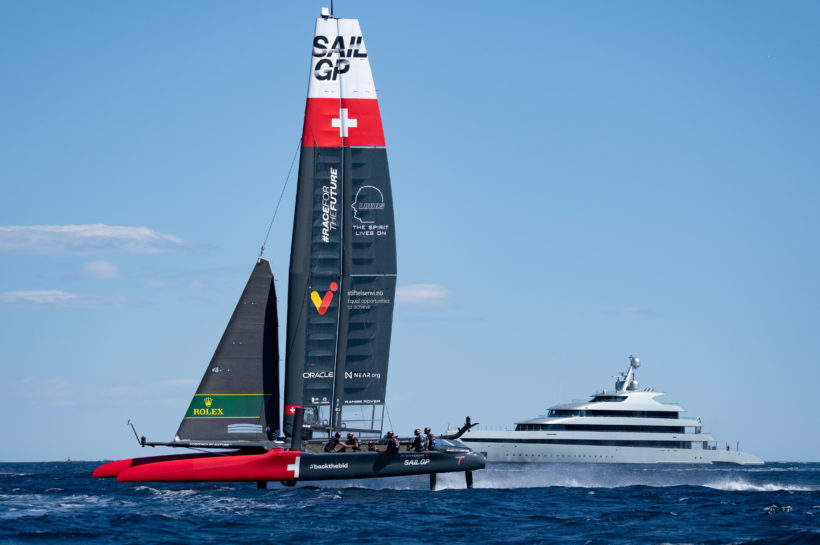 It was a big opening day in Saint-Tropez at the Range Rover France Sail Grand Prix. With the wind gusting up to 30 knots, the Swiss – and SailGP fleet – raced in the most breeze they have ever sailed in. The team also hit speeds of 95 kph on the French Riviera, its top speed so far.

The Swiss went on to place 7th, 8th and 5th in the three races of the day. During yesterday’s practice race day the team were hit with a four-point penalty due to a collision with USA. Today’s extreme conditions made it hard to shift them, but with three more fleet races – plus the three-team winner takes all final – it’s all to play for tomorrow.

The New Zealand SailGP Team sailed well in the breeze to take two out of three race wins, elevating them to top the leaderboard, while SailGP USA, led by Jimmy Spithill, sit in second and the Aussies, led by Tom Slingsby in third.

Swiss SailGP Team’s co-driver and sailing advisor, Nathan Outteridge, on race day one. “We had plenty on here in Saint-Tropez for our first race day! It was pretty extreme out there, I’ve never had to sail these boats in as much wind. We had the most wind we’ve ever raced in and were hitting the highest speeds that we’ve ever had before – the French team almost hit 100 kph!

“Luckily we had a breezy day yesterday for the training so we had some experience together racing in these conditions. It was a tough day on the results and we probably we weren’t the slickest boat around the course but we had a lot of fun and were really in the mix amongst it all.”

The Range Rover France Sail Grand Prix returns tomorrow at 14:30 CEST, with ‘Super Sunday’. It looks set to be a lighter day on the water but still with plenty of excitement. SailGP is broadcast live in Switzerland on Blue Sports TV and YouTube.