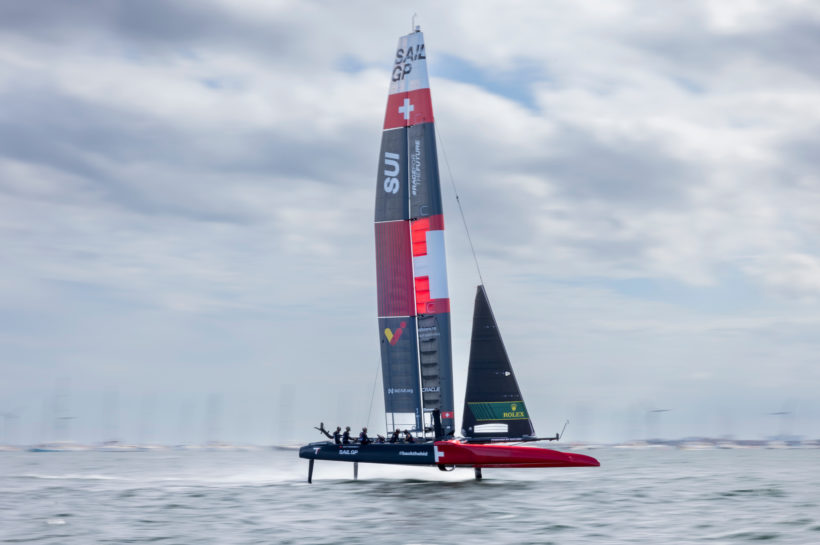 The Danish event brought a new line up onboard the Swiss F50 with Nathan Outteridge behind the wheel, Sébastien Schneiter racing as Strategist and Laurane Mettraux on the handles in the ‘G2’ grinder position. Despite only a few hours of practice together, ahead of the first race, the team were on the pace, in the mix and placed a 7-7-5 racing record.

Co-driver, Nathan Outteridge, on his debut with the Swiss, “It was a bit of a baptism of fire for me, being back racing in SailGP, the racing is intense!

“But we were up there in the thick of it, fighting for good positions and ultimately lack of time together as a group – and a penalty here and there – cost us a few points.

“Overall I think we have made a big step forward as a team. I personally loved it, sailing with the crew, and there’s absolutely potential for the team to deliver.”

Sébastien Schneiter on racing in a new position, “It was really interesting to be in a different position on the boat and you see a lot of different things from this angle. As the strategist I was able to have a bit more time looking around and seeing other tactical situations which could be useful for future races when I will be back driving. It was also really interesting to see how Nathan operates and see how he communicates.

“Overall, I think it was a positive day, we see that there’s not a huge gap but it’s about the little details and it shows that it’s just a long process for the whole team, as a unit.

“We get the chance to race together again in just three weeks in Saint-Tropez, so we will have a look at the areas where we have made some gains and what else we need to focus on.”

Saint-Tropez in France is the next stop for SailGP, before the fleet visits Cádiz, Dubai, Singapore, Sydney, Christchurch and season finale in San Francisco, May 2023.