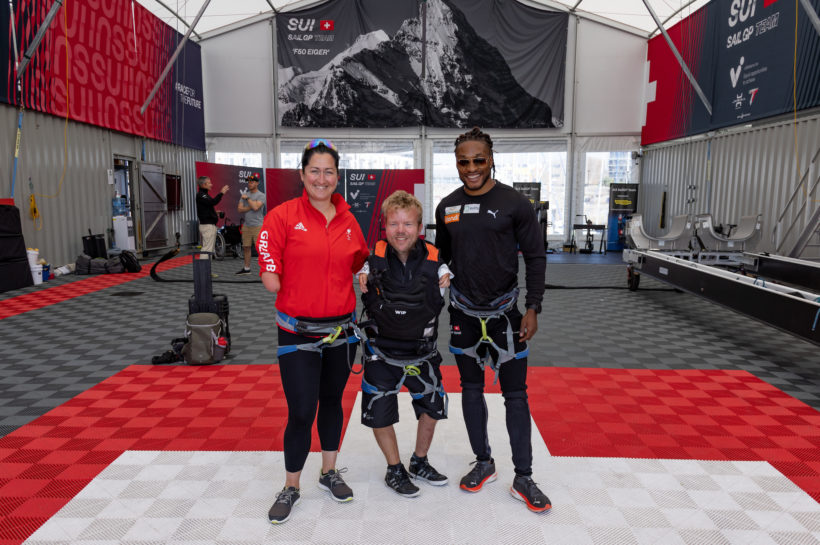 The Swiss team is racing in SailGP’s global league for purpose, supporting its main and Race for the Future partner, Stiftelsen VI, to champion equal opportunities to achieve.

Together they are promoting an important call to action, asking competitors and fans worldwide to ‘#BacktheBid’, World Sailing’s campaign to see the sport of sailing reinstated in the Paralympic Games in time for LA28.

Bjørnar Erikstad, who was born with TAR syndrome, is CEO of VI Foundation. “The VI Foundation utilises sports to show that disabled people are able to do a lot of things, that’s our mission to show equal opportunities to achieve, and we use sports a lot because sport is crucial for many people. People with disabilities can be a part of society, but if society wants them to be.

“What we hope to achieve from our partnership with the Swiss SailGP Team is to show that everything is possible. Sailing is a great sport, it is a very inclusive, very inclusive sport, and if everyone has the right mindset, you can go for a sail onboard a F50!

“Our SailGP sailing experience was an amazing moment for us all. It’s so exciting onboard, especially in the turns, you can feel the g-force. It was super cool and I will never forget it!”

Salum Kashafali was diagnosed at 12 years old with Stargardt disease which causes a loss of central vision. Having previously competed as an able-bodied athlete in 2011 he made the decision to switch to Para athletics in 2018 when he was struggling with a hamstring injury and his eyesight deteriorated. After being officially classified as a Para athlete in 2019, he then entered his first Paralympic games in Tokyo in 2020. With determination and mindset, Kashafali says ‘Everything is possible. It doesn’t matter if you cannot see or cannot walk, you can always do something. Get up and train and do enough to succeed.’

Kashafali is used to sprinting at speeds of 40 km/h plus, onboard with the team he was reaching speeds of 60 km/h.“It was a lot of fun on the F50! It was awesome, I really enjoyed it. We all feel very lucky to sail with the team. It was a little bit faster than I usually run … but for sure I will take that!”

British Paralympian, Hannah Stodel, was born with Dysmeli. She’s raced at four Paralympic games, including a home event at London 2012 in the Sonar class, and now has ambitions for a Vendee Globe campaign. The Vendee Globe is a real test of endurance, racing round the world, solo, non-stop and without assistance.

“I had an amazing time with the team in Plymouth. I even got an opportunity to drive the boat, thanks to Seb! Listening to the team communicate and interact onboard was unreal. It’s been really special.”

During the Plymouth event, VI Foundation also hosted the One Sport x Equal Opportunities to achieve workshop at the Swiss base. Guests included members from each of the SailGP teams and the SailGP Purpose and Impact Team.