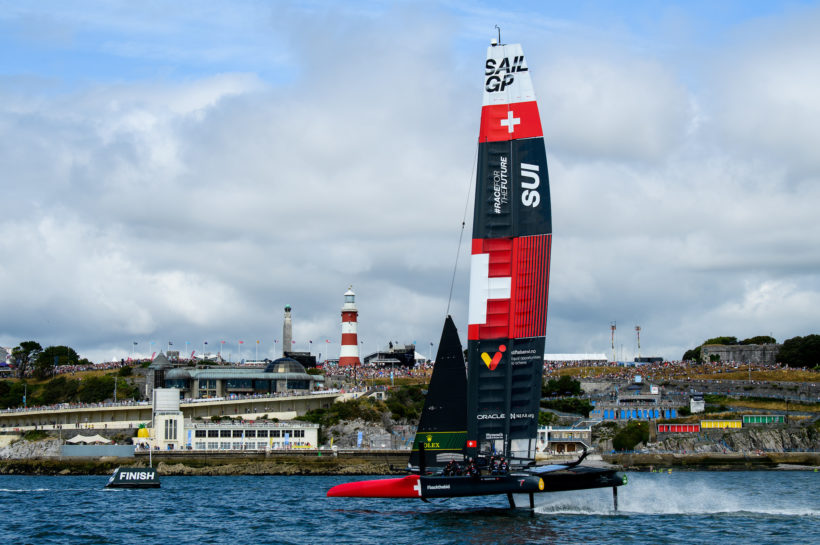 The Great Britain Sail Grand Prix took place over two days in Plymouth this weekend in front of one of the biggest crowds of the season so far. It was the Swiss team’s third ever SailGP event and today’s final race day proved to be a tricky one with light and shifty conditions.

Sébastien Schneiter on the racing and result, “We’ve just finished our third event of season three here in Plymouth. We were a bit disappointed after today’s racing; yesterday we had a decent and solid day but today we didn’t quite manage to get the boat off the start line, we got caught twice in no wind and that made us start a lot later than some of the other teams.

“But once we got going the team sailed really well, with good boat handling and we caught up a lot of metres and a few boats, but we started with such a disadvantage that it was hard to come back. We are definitely seeing improvements though but would like to show it with some better results.”

The team had some additional support and knowledge in Plymouth, with former driver and CEO of Japan SailGP Team, Nathan Outteridge, on hand as sailing adviser. Schneiter on Nathan’s guidance, “It was really cool to have Nathan here with us in Plymouth, it worked really well, I think we took a lot of notes in the last three days! Hopefully we can work together again later in the season, but it was such a great opportunity for our team for him to be here with us for this event.”

Switzerland SailGP Team is supported by its main partner and Race for the Future partner, the VI Foundation. The team are racing with an important call to action for competitors and fans world-wide; to champion equal opportunities to achieve and to ‘#BacktheBid’, to see the sport of sailing reinstated in the Paralympic Games in time for LA28.