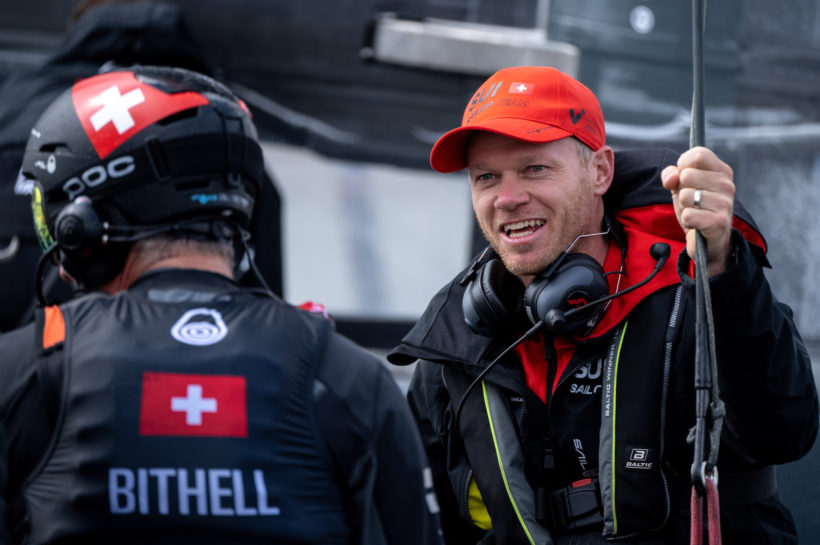 Former Japan driver Nathan Outteridge has opened up about the scope of his role advising the Switzerland team at the Great Britain Sail Grand Prix in Plymouth.

Soon after the news broke that Japan was out of the league, Switzerland appointed Outteridge to the position of ‘sailing advisor’ to fast-track the learnings of the team.

The arrangement came about after Switzerland driver Sébastien Schneiter directly reached out to Outteridge. “Straight away we thought there was an opportunity there,” Schneiter said. Outteridge, who was already in the UK for personal commitments, jumped at the chance.

“I enjoy being around the SailGP event and have a lot of experience with the racing and thought it was a good opportunity to come and help Seb out.” Outteridge joined the team for practice sessions ahead of racing, sharing the wheel with Schneiter to demonstrate his driving techniques around manoeuvres. “We’re looking at how to improve the consistency because these boats are quite difficult to sail without even thinking about racing,” Outteridge said.

Once a team has ‘good manoeuvre principles’ then ‘racing becomes much easier,’ he said. “Until you have the boat handling sorted, you can’t really race, and that’s probably what’s quite frustrating for the team right now.” Outteridge pointed to the team’s performance in the first day of the Great Britain Sail Grand Prix, which saw Switzerland pick up a 5-7-8 racing record. It is the ‘execution of manoeuvres’ which is ‘costing the points’, Outteridge said.

He pointed to the performance of Great Britain in the first day of racing. Despite three bad starts, the team was able to sail back up through the pack and finish mid-fleet. “A good team like GBR use their boat handling to get back through the fleet,” Outteridge said, adding that Ben Ainslie’s team ‘probably should have come last’ in several of the races but ‘just kept pushing’.

Good boat handling is also crucial is recovering from a bad start when the team’s ‘Plan A’ doesn’t pan out. The Swiss, he said, had a ‘similar Plan A’ to other teams on the course, which resulted in them being ‘boxed out’ on the starting line. “We’re reviewing that – if your Plan A doesn’t work, how do you move to a Plan B,” Outteridge said. “Some teams are good at adapting their plan and getting a good start so I think that’s a big thing for us to work on.”

From his side, Schneiter said Outteridge’s involvement has allowed him to ‘compare and learn from the best’. “For us, it’s about the long term picture and trying to learn as much as possible, as quickly as possible.”

The realistic goal, he added, is for the Swiss team to be ‘performing next season’. “But if we can start performing at the end of this season, that will be a good sign.’

With limited training time available, the recruitment of Outteridge is part of the team’s ambition to ‘train smarter’, Schneiter said. “You can train a bit harder but everyone is training hard already,” he said. “It’s just about finding the little opportunities and tricks to find the edges.”