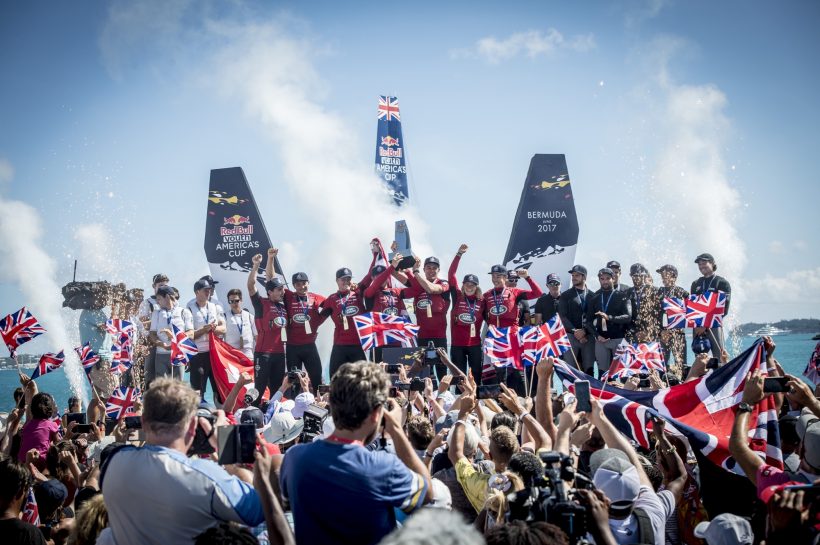 Team Tilt did it! Sebastien Schneiter and his team finished the second edition of the Red Bull Youth America’s Cup in third place overall, achieving their sought after and hard-fought podium position. Land Rover BAR Academy are crowned Red Bull Youth America’s Cup champions with defenders NZL Sailing team in second place.
The very short and intense format tested the eight finalists to their limits. Team Tilt fought hard on the opening day on Tuesday to finish in second place, tied on points with Team France Jeune. Determined to improve their starts on day two, the young Swiss team had a disappointing opening race, posting a 5th place, before regrouping to start well in the penultimate race of the series. They negotiated the tricky conditions effectively to finish 3rd. In a heart stopping moment, Sebastien and his men earned a penalty at the start of the final race of the day, but fought back all the way to the finish to post a 4th guaranteeing their place on the third step of the podium!
Light conditions dogged the Great Sound of Bermuda for the two-day final, although sailors and spectators were treated to some foiling action today when the wind settled in at 8-12 knots and the AC45Fs lifted out of the water!
The Red Bull Youth America’s Cup is reserved for under 24-year-old youth sailors. This was the second edition of the event that takes place on the side-lines of the America’s Cup. Team Tilt has raced both editions, finishing 4th in the inaugural event in San Francisco in 2013 with Lucien Cujean at the helm. Jocelyn Keller and Jeremy Bachelin, crew members for the 2017 campaign, were also onboard in 2013.
Team Tilt plans to stay in Bermuda until Monday 26 June when the team is scheduled to arrive in Switzerland. Further details on time of arrival will be communicated closer to the time for those that would like to great the team at the airport.

Tanguy Cariou: “We are delighted to finish third after a heart stopping final race, we were not holding all the cards and on top of that we got a penalty on the start line, but the team did its absolute maximum and we are all very happy with the result.”

Sebastien Schneiter: “Our goal was to finish on the podium and after almost three years of training, we have achieved it, so we are delighted with this result. We had a lot of fun sailing together and learned a lot during the campaign. We didn’t sail to the best of our ability, but we did show that we can fight until the very end. There were a lot of twists and turns during the final race today, but we did our utmost and kept our cool. It feels strange to think that it is all over, but I am very proud of my team; we fought to the end for the points that we needed and we are now looking forward to returning to Switzerland to celebrate with our friends and families.”

Alex Schneiter: “Mission accomplished! We are on the podium after a difficult event in tricky conditions. The podium was still in play right up to the final minutes of the last race and the team fought to the bitter end! It was an emotional competition with many twists and turns along the way. The standard set by the British and New Zealand teams is incredibly high and the Swiss have demonstrated that they can compete with the best nations in world sailing. Next, we will take a breath after this intense adventure, and then focus on the Olympics with Sebastien and Lucien on the 49er and Maud Jayet on the Laser Radial.”
Sébastien Schneiter – helmsman/skipper
Jérémy Bachelin – wing trimmer
Jocelyn Keller – foil trimmer
Guillaume Rigot – foil trimmer
Nils Theuninck – headsail trimmer
Arthur Cevey – bowman
Florian Trüb – bow assist
Tanguy Cariou – sports director
Pietro Sibello – coach
Alex Schneiter – team leader
Jimmy Le Baut – boat captain
Michaël Vincent – physical trainer
François Rayroux – legal
Loris von Siebenthal – photo
Christophe Margot – video
Sophia Urban – communication